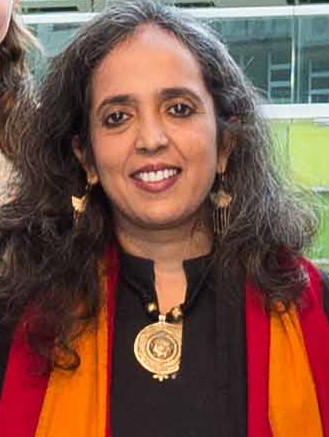 Dr. Damodaran did her MPhil in Economics from the Centre for Economic Studies and Planning, Jawaharlal Nehru University, Delhi on Trends in India’s Import Structure after Early Liberalisation from the mid-eighties. Her PhD in economics from the same institution was on the relationship between Export Orientation, Economic Organisation and Labour Markets in the Leather Industry in India.

Dr. Sumangala Damodaran is a Professor of Economics, Development Studies and Popular Music Studies at Ambedkar University Delhi. After seventeen years of teaching Economics at Lady Shri Ram College, University of Delhi and a year of working with  the National Commission for Enterprises in the Unorganised Sector (the Arjun Sengupta Committee) of the Government of India, she joined AUD and was involved in the setting up of the  School of Development Studies and the School of Culture and Creative Expressions. As a development economist, her research and publications fall broadly within the rubric of Industrial and Labour studies and more specifically on Industrial Organisation, Global Value Chains, the Informal Sector, Labour and Migration. Apart from her academic involvements as an economist and social scientist, she is also a singer and composer. Her archiving and documentation of the musical tradition of the Indian People’s Theatre Association from the 1940s and 1950s has resulted in a book titled "The Radical Impulse: Music in the Tradition of the IPTA"  and  an album titled ‘Songs of Protest’ and  she has performed from the documented repertoire extensively in different parts of the country and abroad. She has also collaborated with poets and musicians from South Africa around a project titled ‘Insurrections' which has resulted in four albums. She is currently engaged in researching the relationship between music and migration, particularly of women in slavery and servitude across centuries and across vast tracts of the globe that were linked through long distance trade in commodities and symbolic goods. This work is being done in collaboration with several universities in Africa and Asia.

She has been involved in research and consultation with the International Labour Organisation (ILO) for about a decade now and has worked in a variety of the ILO’s projects, on areas ranging from the urban informal sector to Factory Improvement Programmes, Labour processes and Decent Work. Since 2009, she has been part of the ILO’s network called Regulating for Decent Work (RDW) and was an invited panelist on a panel to formulate a research agenda for the ILO-RDW in July 2009. Presently, she is involved with the ILO, Geneva to study decent work implications of Asian investments in Africa. She has also been involved with the African programme for Rethinking Development Economics (APORDE), and was involved in the planning and conducting of this international workshop as its Deputy Course Director in Durban, South Africa, for the year 2009. In the past year or so, Dr.Damodaran has been involved in collaborative work with the Labour and Livelihoods Unit of the Department of Sociology, University of Cape Town, South Africa, as part of a Research Programme of the National Research Foundation, South Africa. She has been involved in advisory capacity and in training programmes of the V.V.Giri National Labour Institute, Noida and the National Judicial Academy, Bhopal. She was awarded a one year Research Grant by the Gender and Labour programme of the National Labour Institute, India, to work on Gender and Migration in 2006.

Dr. Damodaran has also, in recent years, been involved with research and teaching in Popular Music Studies and is involved with the setting up of the School of Culture and Creative Expressions at AUD in this capacity. Beginning from an independent research fellowship of Sarai, Centre for Studies in Developing Societies (CSDS), New Delhi, she has been involved in research and documentation of a forgotten musical tradition, that of the Indian People’s Theatre Association, from the 1940s and 1950s and this work is presently being supported by a grant from the National School of Drama, New Delhi. She has lectured on the subject at the School of Arts and Aesthetics, JNU, New Delhi, various colleges in Delhi University and at the Centre for India Studies in Africa, University of the Witwatersrand, South Africa. She has also performed from the repertoire extensively in different parts of the country and has recently finished recording a selection of the songs from the research into an album with professional musicians.

1.Issues in Capital Account Convertibility, paper in Global Finance edited by Walden Bello, Nicola Bullard and Kamal Malhotra, Zed Books, 2001
2.Manufactured Exports and Gender Based Employment in India – Examining the Globalisation – Casualisation Linkage for the Indian Leather and Leather Products Industry, paper in Labour and Development, Vol 10, No.2, 2004
3.State Policy, Export Orientation and Labour: An Analysis of the Links in the Leather and Leather Products industry in India, paper in the Indian Journal of Labour Economics, October-December 2005
4.Demand-Supply Mismatches and the Role of Markets in Skill Development: Uncovering the Dimensions in India’s Informal Sector, paper in the Indian Journal of Labour Economics, Vol 51, No.4, October-December 2008
5.Informal Sector and the Leather Industry in India, paper in Oberai,A.S and G.K.Chaddha (eds) Job Creation in the Urban Informal Sector in India, ILO – SAAT, New Delhi, 2001
6.Contributed substantially to three reports of the NCEUS titled Skill Development and Employment Assurance in the Unorganised Sector, Technology Upgradation in the Unorganised Sector and The Challenge of Employment in India – the Informal Economy Perspective in 2009.
7. Upgradation or flexible casualization? Exploring the Dynamics of Global Value Chain Incorporation in the Indian Leather Industry, chapter in Anne Posthuma and Dev Nathan (eds) Labour in Global Production Networks in India, Oxford University Press, 2010.
8. “Protest Through Music”, Seminar, August 2008.

1.Chapter on Women and Economy in Women and Human Development in India, Zubaan books in collaboration with UNDP, forthcoming, 2009

2.“Women” versus “Breadwinners”: Exploring Labour Market Dynamics, Agency and Identity among Migrant Nurses from Kerala (India) accepted for publication in Feminist Economics, subject to revisions based on referee comments